OXYGEN TO REGENERATE SKIN AND HAIR. 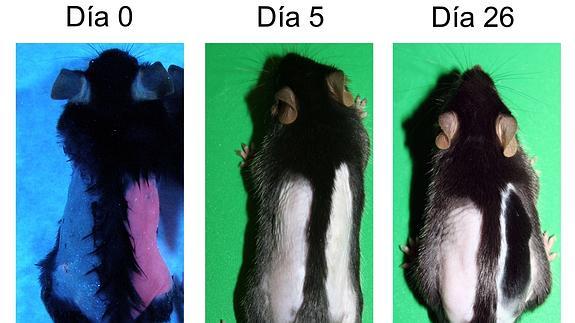 An investigation of the Hospital Ramón y Cajal shows that it is possible to use reactive oxygen species, highly toxic, to activate the proliferation of skin stem cells

Thanks to the use of reactive oxygen species (ROS), usually toxic and related to aging, hair growth and wound healing can be accelerated, even with potential applications for chronic ulcers in elderly and diabetic patients, surgical wounds, extensive burns or certain alopecias.

Until now only the defensive response of the living organism to the toxicity of ROS was known, and also that, despite multiple mechanisms to eliminate them effectively by the cells of aerobic organisms, the biological damage produced by ROS accumulates progressively and it is associated with the aging process. However, it has been demonstrated how the transient and limited production of this type of oxygen, applied to the tissue of a living organism, is capable of activating the stem cells and achieving tissue regeneration.

The research, conducted by the Experimental Dermatology and Cutaneous Biology Group of the Ramón y Cajal Institute of Health Research (Irycis), of the Ramón y Cajal University Hospital, experimented with the skin of the mouse with the aim of demonstrating that an endogenous production of ROS could have physiological stimulating and regulating effects.

Published in the Journal of Investigative Dermatology, belonging to the Nature group, the study included the development of a technology to transiently activate the endogenous production of small amounts of ROS in cells in culture. This process, which stimulates contracted cell proliferation and without lethal effects, is based on the administration of Protoporphyrin IX precursors (PpIX) to cell cultures.

The advantages of the procedure, coordinated by the researcher Jesús Espada, are that PpIX is a compound that can be synthesized naturally by most of the body’s cells in mammals. It is also photosensitive, capable of producing ROS from intracellular oxygen when it is illuminated with light of a suitable wavelength. In this case, red light, biologically safe but powerful within the organic matter.

The accumulation of precursors in cells results in a peak in the synthesis of PpIX that, when illuminated with red light, induces the transient generation of ROS. The adaptation of this procedure to the skin of the mouse, applying the precursors topically, in the form of cream, in specific regions of the tissue and subsequent irradiation of the animal in the desired area, obtained surprising results, explain the researchers.

With these results it has been shown for the first time that transiently activating ROS production in the tissue helps the proliferation of skin stem cells and homeostatic tissue regeneration programs. “As a result, it is possible to use the transient production of ROS to dramatically accelerate hair growth or the healing process of burns,” they say.

This opens up the possibility of applying this procedure in routine clinical practice, for the effective and cheap treatment of pathologies and skin lesions, such as chronic ulcers in elderly and diabetic patients, surgical wounds, extensive burns or alopecias. Disorders that have a high incidence in the population. The next step is the beginning of the proof of concept tests in volunteers.